Musician Don’t DJ uses the Euclidean Pattern Generator in his music. A record was released and I became involved.

It’s been about five years since I posted anything in this blog, so this is a nice opportunity to try and bring it back to life.

Last year artist Thomas Baldischwyler contacted me. He runs the Hamburg based Travel By Goods record label and was to release a record by Berlin musician Florian Meyer under his artist name Don’t DJ. From Thomas I learned that Florian uses the Euclidean Pattern Generator in his music. Not only to produce music in the studio, but also to perform live on stage! 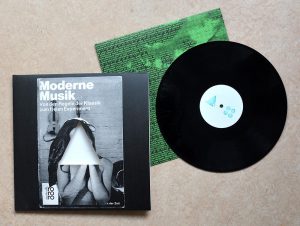 The music is very much based on the Euclidean Pattern Generator: Two of the three tracks on the vinyl 12″ are made solely with my software sequencing his music. This gave Thomas the idea to accompany the release with a printed conversation between Florian an me. A discussion between the musician who uses software to create his music and the software developer who created the application.

I went to Berlin last summer to meet Florian and Thomas, and we recorded a conversation. The interesting parts were transcribed and printed on the back of a poster that accompanies the release. The record was released late last year under its full title:

The pattern generator in live use 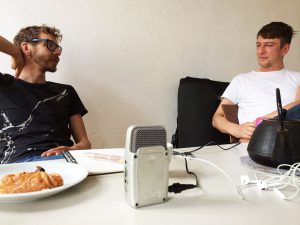 It was very interesting to hear how Florian uses the application. There appear to be certain bugs in the software that he found and that he likes to use in an “it’s not a a bug, it’a a feature” type of way.

One is that apparently after prolonged use the tempo varies. It can slow down quite a bit. So much that he has had remarks from members of the audience after a performance who clearly noticed. The tempo can also increase again at other times. I don’t know why this is, but I suspect it’s processor load that causes it.

Another bug is that when you change the settings of a Euclidean rhythm – pulses, length or rotation – while the patterns play, small synchronisation errors appear. This was never my intention of course, but Florian likes these because at times they can introduce a nice extra groove to the combined rhythm as a whole.

Improvements for live use 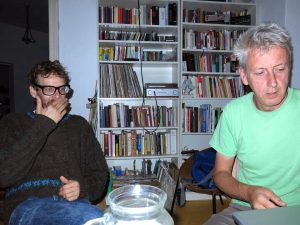 Florian and me at the laptop.

A problem for live performance is that interaction is completely mouse-based. This makes changing patterns quickly very difficult. Especially because you first have to select a pattern by mouse click on the pattern wheel graphic, and then drag sliders to adjust settings. This requires precise and concentrated mouse use, which is not ideal while on stage in front of an audience.

The solution would be to have MIDI controller support, so that parameters can be tied to physical knobs or sliders. I think this is very interesting to try out. I will certainly incorporate it in a new version of the Euclidean Pattern Generator.

Thanks James! Yes I’m picking up this project again. Not so much the Java application anymore, but an online version in Javascript.

I came across the first Java version of this some years ago, and thought it was great. I didn’t do much with it at the time, but I remembered it recently and wanted to find it to help generate some new ideas. I’m glad to hear that other people are also using it, and that you’re still interested in the project.