I posted a lot of experimental stuff on this weblog over the past year. Or components that might have their use when built into proper applications. But this is my first web app that’s useful on it’s own.

This is a simple Flash audio editor that works in the browser. Everything it does is done by ActionScript code inside the application. There’s no backend that does the difficult work. So it would function just as well in the standalone Flash Player or exported as an Air application as it does in the browser.

This audio editor has only a very basic set of features. Here’s the things it can do:

This project is built on the PureMVC framework again. It’s what I’ve been using for all my projects the last half year and I’m still really happy with it. The code gets more complicated with each project but I still have a clear overview of where everything is and I can even find my way quickly around older projects.

Here’s a short overview of the main building blocks of the audio engine: 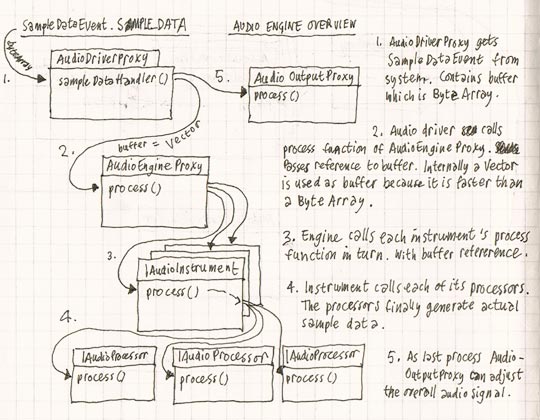 The audio editor is a really simple implementation of this audio engine: There is only one instrument – the editor itself (WaveEditorProxy) – and it can play only one sound at a time: the audio being edited (PitchedSampleProcessor as IAudioProcessor).

The Harrington 1200, a state of the art songwriting computer.

Hi Nick, thanks.
The assets.fla was probably made in Flash CS4 so must be the problem.

Yes sure, feel free to use it, change it, add to it or do whatever you want with it.

Is it ok to upload and add your audio editor to my website or blog?

This is extremely impressive. I am looking to adapt from this project; however, I am unable to open your source files on my MacBook Pro (I am getting a ‘Failed to open document’ error). I am using Adobe Flash CS3 Professional. Do you know of any way around this?

Again, really nice work. I hope I can use this as a foundation in the future.