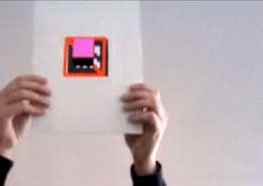 Yes I know, it’s the hype of 2009 and we’re in 2010 now, but I haven’t seen anything yet where augmented reality is combined with sound. If you do know examples of augmented reality and audio, please leave a comment. I’d love to see what other people do with it.

This is a small experiment I started half a year ago but never finished. I looked it up again last week because I needed a Flash AR example for a project at work. Here I improved it a bit to make it more presentable.

It’s basically a sort of theremin. Hold the marker in front of your computer’s webcam and a sound starts to play. Move the marker and the sound changes.

All source files can be downloaded here. They’re a bit messy however. This was just a quick update to an abandoned older experiment, I didn’t take care to write clean code.

To try this you’ll need the marker to move in front of the webcam. Download it here as a PDF file. Print the file and – for the best results – glue it on a piece of cardboard.

Because I know it's a lot of hassle to download and print the marker I recorded a short demonstration screencap video to show how it all works.

How to use it

Click "Allow" on the Flash player settings screen. This allows Flash to switch on the webcam and use the images it films. Then hold the printed marker in front of the webcam to generate some sounds:

This idea could be taken a lot further. There's more information to be had from the marker:

The only obstacle for direct musical use is the latency. The delay between a movement and hearing the resulting sound is too big to be able to play along with a record for example.

For the augmented reality code I used FLARToolkit. More information can be found at the English FLARToolKit page and the Start Up Guide.

I do augmented reality with sound art

Hey great development! I have a couple questions. Do you know of any other AR with sound yet? Also, how do I get into the source code files? I am currently in some university CS classes and would love to see how you did this!

this tech is modern.

@Toms: I sent you an email to explain, good luck!

Hi!
I found Your exciting app.
I am newbie in AR development, but wanted to now better Your app.
Did you made it with Eclipse or Flash Builder?
I just don’t understand what is needed to open it. Some files are .as what can be opened with Flash Builder. But in Audio v010 FlarToolkit.launch I found indication to Eclipse.
I looked for Saqoosha starter kit and there is .fla file, so idea is clear.

I would be very appreciate about your reply!

@ปั๊มแอนด์วาล์ว: The app uses a sound engine I wrote myself. I haven’t heard of arsound before and couldn’t find any info about it. Do you have a link for more about arsound?

Please note that you can download the source files of the app and have a look if you’re interested.

about sound, you use arsound?